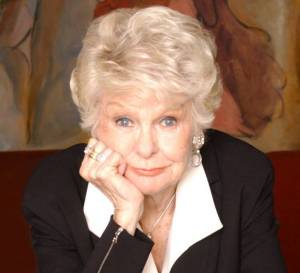 Broadway legend Elaine Stritch’s 2006 cabaret show “At Home at the Carlyle…Again” marked her return to the legendary New York venue Café Carlyle following the success of her standing room only engagements there in 2005.  With her longtime music director Rob Bowman leading a six-piece band, Ms. Stritch again commuted to work—three flights down from her residence in the Carlyle Hotel—to entertain audiences with songs and stories from her remarkable career.

Stritch is most famous today for her wildly successful auto-biographical theater piece Elaine Stritch At Liberty,  which won a Tony Award and two Drama Desk Awards when it moved to Broadway. She toured the show across the country, ending in San Francisco.

All that aside, what has she been up to? “I’ve done some benefits,” she ruminates, “Mostly benefits, actually—and preparing for the next club act. This club act business is very serious, it’s a very hard job and as soon as you stop one, and if you’re booked for the next year, you’d better start working on the next one pretty soon. I am ready: I’ve written the act, honey. It’ll be finished, it opens September 12. I started working on this way back in April.”

It’s not that she doesn’t enjoy working in cabaret, but it’s still “a challenge more than it is enjoyment,” she says. “Most of the work I do is a challenge; it’s not my idea of having a good time. What is my idea of having a good time? I’m not quite sure, these days. My good time really is in my work I guess, but really more of a satisfying time than a ‘good’ time. The only kind of time I know how to have. I want to work and I don’t want to work.

“The bottom line,” she continues, “is last year was the first time I’ve done this and I think it’s the hardest form of entertainment there is. And next year I hope it’s a little easier, I hope that the work I did last year will pay off this year. I mean, I don’t want a person coming to see me thinking this is hard labor, and that I’m not enjoying it, that’s not true, I love to entertain people. But I think cabaret is the hardest medium there is, no two ways about it. The theatre is as twice as easy as this, making movies or television is a cinch compared to this. I think it’s because you’re in very close contact with these people. And also your competition is a double scotch. I know all about drinking—and that’s a lot of fun! So I have to be awful good to top the bill in that department, it’s the strongest competition in the world, really stiff competition and you have to be very entertaining. This is not a piano bar!”

She’s “not working on the new Noel Coward show yet, it’s just—it’s not even definite, but yes, I’m interested in doing it. In my act there’s always a song by Noel. But that has nothing to do with the London show, honey, my cabaret act was written long before they even approached me about doing the show in London. No, how would it, how could it? I just happen to be singing a song that Noel Coward wrote in the act, but that would be par for the course with me,” she laughs. “I’m closely associated with Noel Coward, did a lot of his material, so when I’m getting an act together I always think of him, because it’s so right for cabaret.”

Did she have any sense of the gay world that Coward came out of? “Well worldly matters like that weren’t so worldly when I was a kid. You think about it yourself. It’s a long time ago. I mean nobody was taking about homosexuality as freely as they are today. So I wasn’t aware of it, because it wasn’t out there. My relationship with Noel had nothing to do with that. He was an artist, a writer and he wanted me to do some material of his, it had nothing to do with his sexual preference. No, there was nothing about him that suggested anything that would—to me—in any way—” she trails off, searching for what she’s trying to say. Then she returns with: “No, he was a writer and an artist. I wasn’t thinking about his sexual preference at the time, you know what I mean? You’re telling me that you write for a gay publication. That sort of thing was not happening when I was working with Noel Coward. You know he didn’t say I’m Noel Coward and I’ve written a gay musical. You know what I mean?”